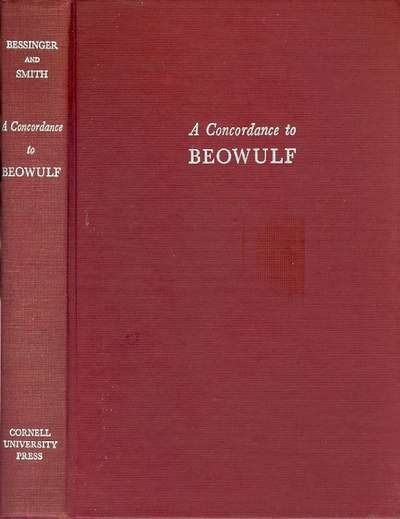 Bessinger, J. B., Jr. (editor)
A CONCORDANCE TO 'BEOWULF'

Programmed by Philip H. Smith, Jr., full concordance (see specimen page below), checklist of homographs in the concordance, appendices giving a sample key-word-in-context concordance and a list of headwords in order of frequency, xxxvi & 373 pp, red cloth (no d/w, but I doubt whether there ever was one), covers very slightly spotted, slight spotting to closed edges of pages, otherwise in very good condition, Cornell University Press 1969

The text used is that of Dobbie in the Anglo-Saxon Poetic Records series, published by Columbia University Press in 1953.

The concordance reprinted in paperback in the USA in 2010 is of Cook’s original 1911 work, whereas this rather more sophisticated concordance used one of the first IBM mainframe computers.  Optical character reading of Anglo-Saxon then being unheard-of, the whole text had to be input on punched cards fed through the computer by suction.  I well remember operating a similar CDC computer at CERN in Geneva in 1971, and if one of these cards had a corner folded over, the computer would chew up about 40 of the cards before it stopped.  All the damaged cards then had to be re-punched manually . . . .

The book is long out of print, and has apparently never been reprinted.  Most copies, as you would imagine, ended up in libraries.